I saw a meme on some social media outlet or other this past week lamenting the state of our culture, specifically that 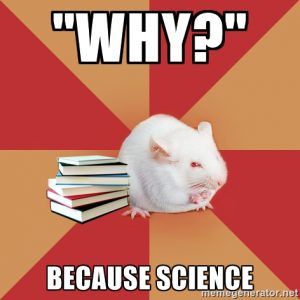 Duck Dynasty aired for four seasons, whereas Cosmos aired for just one. The complaint, I gathered, was that our culture comprises more fundamentalist ignorami than scientific rationalists, which probably explains why we’re in the mess we’re in (and you’re welcome to define that mess as you like).

Now, before I press on, I should confess as the outset that I’ve never seen so much as a clip from Duck Dynasty, so I can’t and won’t (and have no desire to) comment on that show. But the meme still got me thinking about Cosmos, especially its famous opening (second only to Star Trek in terms of sheer power, I’m confident): “The Cosmos is all that is or was or ever will be.”

The quote has a religious feel about it. In fact, it invites religious comparison by suggestively alluding to Revelation 4:8: “Holy, holy, holy is the Lord God Almighty, who was, and is, and is to come.” Carl Sagan, the show’s host and outspoken critic of religion, seems to make a bold religious assertion: that the universe is a closed system—all that ever was or will be—so it would be foolish, ignorant, unscientific to search for something beyond.

But here we come to one of the key distinctions in rational discourse, that between the scientific and the scientistic. (It’s not a misspelling: I’ve coined a new word. I expect the OED to pick it up shortly, such is my influence on Western civilization.) Scientific discourse involves actual science—things like observation, empiricism, hypothesis, data. Scientistic discourse, quite contrarily, involves none of this. It is naked assertion, often offered by a scientist (who really should know better); you will search in vain for the branch of science—physics? chemistry? biology?—that could even pretend to offer empirical verification of said assertion. It is an expression of scientism (hence scientistic), a philosophical view suggesting that true beliefs can only come from scientific study.

Bertrand Russell enunciated the scientistic worldview as quaintly as anyone: “What science cannot discover, mankind cannot know.” Asking even the most basic questions of this statement exposes its folly. For example, did science really discover that what science cannot discover we cannot know? One puzzles to imagine what sort of lab test might verify that conclusion—which means the statement, if true, is false, because science did not discover it. Statements that are false if false and false if true are usually statements not worth bothering about. And philosophies that ground themselves on statements that are false either way are surely philosophies not worth bothering about, no matter how much bluster might accompany them.

Which brings us back to Carl Sagan and his famous quote. While surely a fine statement of philosophical naturalism—the belief that nothing exists beyond the physical world—it is scientistic (not scientific) at its core. It assumes atheistic naturalism without acknowledging the burden of proof. It is as much a statement of religious belief as Genesis 1:1: “In the beginning God created the heavens and the earth.”

I’m wondering if any of you have had run-ins with scientism. If you have, please share your story in the Comments section, including how you’ve equipped yourself to notice and respond. This is an area where we could all use training, I’m sure!

2 Replies to “Because Science”