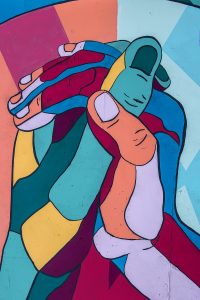 I have been thinking about evangelism a lot lately, perhaps because it has become extraordinarily difficult during winter in a pandemic, and the urgency of the matter and my desire for revival is overwhelming in this stagnant time. Whatever the case, I know that we need to hear Paul’s words recorded above. We live in a culture obsessed with personal rights, which means we’re growing increasingly resistant to the sort of servant-hearted duty Paul exemplifies. Rather than becoming all things to all people that by all possible means we might save some, we dig our heels into the ground and gruffly invite them to come to us on our terms. Not exactly Christ’s incarnational approach!

Notice that Paul actually changes his practices in order to remove every possible stumbling block apart from the gospel itself. (That is, he’s not compromising on the content, but he’s more than happy to compromise on the packaging.) I have a fair guess based on what he says in Corinthians that he probably didn’t eat any pork or lobster when evangelizing the Jewish people, but wouldn’t say no to a bacon cheeseburger when reaching out to a group of Gentiles. What drove his decision-making process wasn’t his personal preferences, but the needs and tendencies of the group before him.

Does this have any relevance for us today? Absolutely. While the Jew/Gentile distinction might not reduce exactly to religious/secular today, there are important overlaps. We, like Paul, will be around people who take religion very seriously, and who could get offended very quickly if we transgress religious duties. And we will be around people who just want to do whatever they want to do, and who could get annoyed very quickly if we start “imposing our morality” on them. Let me share two examples, one on each side.

I remember hearing Jerry Root share a story at an evangelism conference I attended a few years ago. As a college student, he’d worked a summer job on an oil pipeline. As a young Christian who was inexperienced at the job, he took the brunt of the teasing throughout the summer. But he persisted in loving his co-workers well, and let his life shine as an implicit witness. At the end of the summer, he asked if he could share his faith with them. The guys said yes—if he brought beer. What if young Jerry had gotten hung up on his morality, and refused to buy a case of beer? It might not have been his preference, but was he willing to “become all things to all people” in order to seize this opportunity? Would we? In this case, he put aside his preferences, bought the beer, and had a fruitful conversation with his new friends.

On the flip side, however, we might look to our Muslim neighbors (who won’t be asking for beer from us). Talk to Muslims in the secularized West, and they will express shock and horror at Christianity in large part because of how “Christians” (not necessarily evangelicals) let their daughters (and wives) dress. Of course, even among evangelicals modesty has fallen on hard times. But if immodesty raises an impenetrable barrier to evangelistic conversations with people in desperate need of Christ, are we willing to lay aside our fashion preferences—to become all things to all people—in order to reach the lost?

As we look at our oikos—the people God has placed in our lives who need Jesus—let us consider carefully how we might best reach them, and be willing to lay aside our preferences to do so. Let’s live for the sake of the gospel, that we may share with them in its infinite blessings.

2 Replies to “All Things to All People”