I’m not in the habit of ranting—at least not this early in the morning—and the holidays don’t bother me much, but there has been something brewing in me for several years now, and I feel it is time to let it out. As I say that, the wisdom of Proverbs assails me, imploring me to hold my tongue: “Those who guard their lips preserve their lives,” I hear, “but those who speak rashly will come to ruin” (13:3); “a fool’s heart blurts out folly” (12:23), they tell me, but still I speak.

There has been a growing frustration among evangelicals about the phrase “Happy Holidays,” which is now excoriated almost universally among my brethren as “offensive” 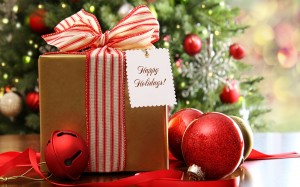 and “politically correct” (an odd combination of critiques). It represents, so they tell me, the slow degeneration of the once great American society—a Christian society, you will remember—into the godless postmodern slough we now inhabit. Christmas is about Jesus (as it surely is), and December is about Christmas—that’s why your kids have a break, after all—so let’s all just acknowledge this fact and wish everybody a merry Christmas, and expect everyone to wish us the same, even if they’re Jewish, Muslim, Buddhist, or atheist. It would be offensive for them not to, that’s what I says.

I confess I find this logic (a generous term) bewildering. Debates about just how Christian a nation America ever was notwithstanding (the evidence is a pretty mixed bag though—just ask the esteemed Mr. Jefferson), I still can’t understand why we make such a fuss about this. America is not now a Christian nation. Given the history of Christendom, I think we can all thank God for that; I would much rather we be yeast in the dough, rather than decreeing that all the dough has been successfully leavened by government fiat (see: Theodosius, Edict of Thessalonica). Many who inhabit this great nation believe in other gods, or believe in none at all. That is part of what makes our nation great, and is a tremendous spur to winsome, loving evangelism in one of the largest mission fields in the world.

And there’s the rub: how can our winsome, loving evangelism and our petulant, trenchant demands that everyone wish us a merry Christmas coexist? In the community of believers, it is a reasonable expectation. Outside, I’m not so sure. Do we imagine ourselves to be contending for the faith once for all entrusted to the saints by insisting everyone celebrate our holiday on our terms? Do we think we honor the name of Christ by demanding that our Hindu or Sikh or agnostic neighbor speak our language or face our wrath (and, worse still, our clever memes on social media)? Why would we expect someone who does not believe in the incarnation of Christ to pretend that matters to them? Would we even want them to?

In acting thus, many of us have defamed the name of Christ, and have given offense where none is needed. We imagine our friends and family, neighbors and coworkers, have stumbled over the Cornerstone, when in fact we have simply tripped them (1 Peter 2:7-8). This is not the offense of the cross. This is a scandal of our own making. Rather than becoming all things to all people so that by all possible means we might save some, we have demanded all people come to us on our terms. Those terms are two: “merry” and “Christmas.”

If we would rather be the aroma of life this Christmas season, let us revere Christ as Lord in our hearts and in our Advent practices, being ready to give an answer to anyone who inquires as to our holiday plans or our seasonal worship customs (1 Peter 3:15-16). We have had a number of people ask about various family worship practices during Advent, leading to some rich conversations. Evangelism is a process, and we have the opportunity to encourage a step in that blessed process—or to stall it before it begins. As for me and my house, would to God it be the former.