Jesus comes to town. He means to pass through Jericho, heading as he is to Jerusalem for what will be his last week before humiliation, torture, and death. The crowds gather as they always do, eager to catch a curious glimpse of this impressive, if extreme, rabbi. One man stands out—not because of his stature, but because of the strength of his desire to see the Christ: Zacchaeus, the hated chief tax-collector, a traitor to his people and his God, all that is venal and mercenary embodied in a most Lilliputian temple.

The evangelist teases us, withholding detail we dearly wish to know. Why did Zacchaeus want to see Jesus so badly? What compels him to climb a nearby sycamore tree for the view it would afford? Why does Jesus stop and pay Zacchaeus the attention he does? Whatever the answers, grace abounds and love has its way.

“Zacchaeus,” our Lord calls out, “come down immediately. I must stay at your house today” (Luke 19:5, NIV). Within a single word Luke captures the wonder of God’s unmitigated favor poured out on the undeserving: must. The evangelist uses this word to express divine necessity. Jesus must stay at Zacchaeus’ house today because the will of God demands it. A sinner needs saving, so divine Love compels Jesus to enter into table-fellowship with him, to bring the healing balm of Gilead to one still unwitting of his mortal wound. Zacchaeus welcomes the Christ gladly.

The crowds have their unsurprising say. To the religious establishment—those impressed with their feigned holiness and whitewashed sepulchers—grace always appears distasteful. “He has gone to be the guest of a sinner,” they mutter (v 7). They speak better than they know, for Christ will soon send his Spirit to indwell Zacchaeus’ decrepit hovel. But our God loves a good fixer-upper—the man or woman who owns his or her desperate need for grace.

Zacchaeus does not do much in the way of entertaining. His neighbors avoid him, the crowds abhor him. He finds welcome nowhere but in the arms of Love. Guilty of sin, despised by all, standing before his gracious Master, Zacchaeus yields himself to God.

He stands up and says to Jesus—not to the crowds hounding him, that he might justify himself in their eyes, but to him from whom he has been justified freely through no merit of his own—“Look, Lord! Here and now I give half of my possessions to the poor, and if I have cheated anybody out of anything, I will pay back four times the amount” (v 8). Salvation has come to Zacchaeus’ house. To God alone be the glory.

How does Zacchaeus experience this newfound salvation? How does he overcome his love of money, the crippling idolatry that has paralyzed his relationships with God and men? He does not settle for cheap grace, “the justification of sin without the justification of the sinner. Grace alone does everything, they say, and so everything can remain as it was before.”[1] He has encountered the Christ; nothing can remain as it was.

He experiences newfound contentment in Christ alone, in whose hand is found eternal pleasure (Psalm 16:11). With such delights to be had, he no longer needs his extra wealth, the luxury and self-indulgence that had become his norm. And so he gives away half his possessions, choosing to live simply for the sake of the kingdom—and his soul. What he gives, he gives generously to the poor specifically: he is not just giving money away for the sake of giving it away, but precisely so that those in need would experience relief by the grace of God and the ministry of his people. Recognizing his sin, he commits himself to deal justly with others from now on: what he has stolen from others, he will reimburse fourfold. Salvation has visibly come to this house. Things will never be the same.

Can salvation come to our houses too? Zacchaeus, it seems to me, has set a pattern for us all to overcome the idolatry that threatens unceasingly. At Mount Sinai, the Lord commanded his people not to have any gods before him (Exodus 20:3). Jesus stood on a different mount millennia later and exhorted his followers, “But seek first his kingdom and his righteousness” (Matthew 6:3). The triune God deserves our absolute, single-minded allegiance—and yet we struggle to give it. We struggle with idolatry. Idolatry involves finding ultimate meaning and significance in anything but God himself, allowing anything to usurp the place in our hearts and lives that belongs to him alone.

Paul describes the human impulse to idolatry vividly: “Although they claim to be wise, they became fools and exchanged the glory of the immortal God for images made to look like a mortal human being and birds and animals and reptiles. . . . They exchanged the truth about God for a lie, and worshiped and served created things rather than the Creator—who is forever praised” (Romans 1:22-23, 25, emphasis added). This unholy exchange—the glory of God for mere images, the truth of God for a lie—that is idolatry. Now, the idols we pursue are rarely evil in themselves, but become evil when we pursue them with religious devotion. Jesus Christ came that we might have the abundant life, surpassing peace, complete joy (John 10:10; 16:33, 24); worshiping idols deprives us of all this. As C.S. Lewis said, “You can’t get second things by putting them first; you can get second things only by putting first things first.”[2] So eliminating idolatry is just another way of saying pursuing joy. “Seek first his kingdom and his righteousness, and all these things will be given to you as well” (Matthew 6:3). His glory, our joy—the beauty of right worship. And yet, though the spirit is willing, our flesh proves so weak.

Undoubtedly we all experience the temptation to idolatry. Perhaps ours is not wealth, as Zacchaeus’ was, but we all struggle to keep God first in our lives. Some worship at the idol success, pursuing achievement and advancement at great cost to their souls. Others long only to be loved, no matter how tawdry or superficial the source. The list goes on. Ours is a crafty enemy, and his weapons—smoke and mirrors—are disastrously potent.

So what do we do once we have identified the idols in our lives? Detecting them takes little in the way of insight, courage, and commitment. Rooting them out—no matter the cost—will prove more difficult.

And yet, to this holy work we are called—no matter the cost. Jesus said to his followers, “If your hand causes you to stumble, cut it off. It is better for you to enter life maimed than with two hands to go into hell, where the fire never goes out” (Mark 9:43). We are to be ruthless in attacking those idols which keep us from spiritual health and vitality. There is no room for complacency. To deal with deep-seated sin in our lives, we must take drastic action—and that may mean making some pretty serious cuts. We may have to cut off our hands in order to save our hearts for Christ. Zacchaeus recognized the gravity of his sin, and so gave away half his possessions; the rich young ruler’s idolatry ran much deeper, so Christ called him to give it up completely (Luke 18:22).

Where are you today? Do you need to make some serious cuts? If so, what is keeping you? As Richard Baxter said, “That man who hath anything in the world so dear to him, that he cannot spare it for Christ, if he call for it, is no true Christian.”[3] I pray no one could say that of us.

So let’s make some cuts. I want to invite you to participate in The Zacchaeus Initiative. Following the model of Zacchaeus, we will attack idolatry in our lives ruthlessly, that we might live single-mindedly for Christ. A slave cannot serve two masters, and we want to serve Christ alone. So how do we follow in the footsteps of the wee little man from Jericho?

First, we must eliminate the sin of idolatry immediately and completely. Zacchaeus’ greed had led him to cheat and steal from his neighbors. Then he encountered Christ. Immediately he committed to stop stealing and agreed to pay the maximum penalty to those from whom he had stolen. Our attack on idolatry must be equally relentless. So if, for example, your worship of the idol love has led you into a dating relationship with a non-Christian, or perhaps into any number of emotional, physical, or sexual compromises, today is the day to make the break, to start anew. If you have given yourself to pornography, the idol sex, confess to godly brothers, install accountability software on the computer today. If your desire for achievement and success has led you to workaholism and a sinful neglect of your family or your soul, make the changes you need to make today. Better to enter the kingdom of God maimed than to perish eternally, with your idols tucked safely in your heart.

Second, we must remove the temptation of idolatry immediately and radically. Zacchaeus saw that money would forever be a struggle in his life. He was not so naïve—as we all too frequently are—to think that he could keep the temptation near at hand without stumbling again. “Can a man scoop fire into his lap without his clothes being burned?” (Proverbs 6:27). And so he eliminated temptation by giving away half of his possessions—a radical step many of us would chafe at today. But idolatry, even the temptation to idolatry, demands severe commitment from us. If we are true followers of Christ, we will mercilessly eradicate whatever keeps us from being wholly his. What will that mean for you?

If you find yourself struggling with vanity, for example, in your pursuit of the idol love, eliminate half the time you spend getting ready in the morning. In other words, look half as good. If electronic media occupies more of your time than your relationship with God, cut out half of it. Watch half as much TV, chat or browse the internet or your social-networking site half as often. If you find yourself living in more luxury than you need, and see it clamoring for your soul’s devotion, sell half your stuff. At least make half as many purchases, eat out half as often, slash your fashion budget in two—whatever is needed. Singles, if you find yourself looking for love in the arms of the opposite sex and not the Savior’s tender embrace, take time off from the opposite sex: no more dates or flirting until a time you set has passed, time devoted to fixing your eyes solely on the Christ who satisfies. If you struggle with perfectionism in your job, especially if it hinders or threatens to hinder your time with God, with your family, with your ministry of disciple-making, learn to settle for “good enough” in the tasks that are less than eternally important.

Do not settle for mere insight, recognizing the idols in your life and the havoc they work in your soul. Labor for real change by God’s grace and the power of his Spirit in your life. “The only man who has the right to say that he is justified by grace alone is the man who has left all to follow Christ,” Bonhoeffer rightly said.[4] Is your experience of grace manifest in your ruthless attack on the idols in your life? Take The Zacchaeus Initiative. Eliminate sin completely, remove temptation radically. 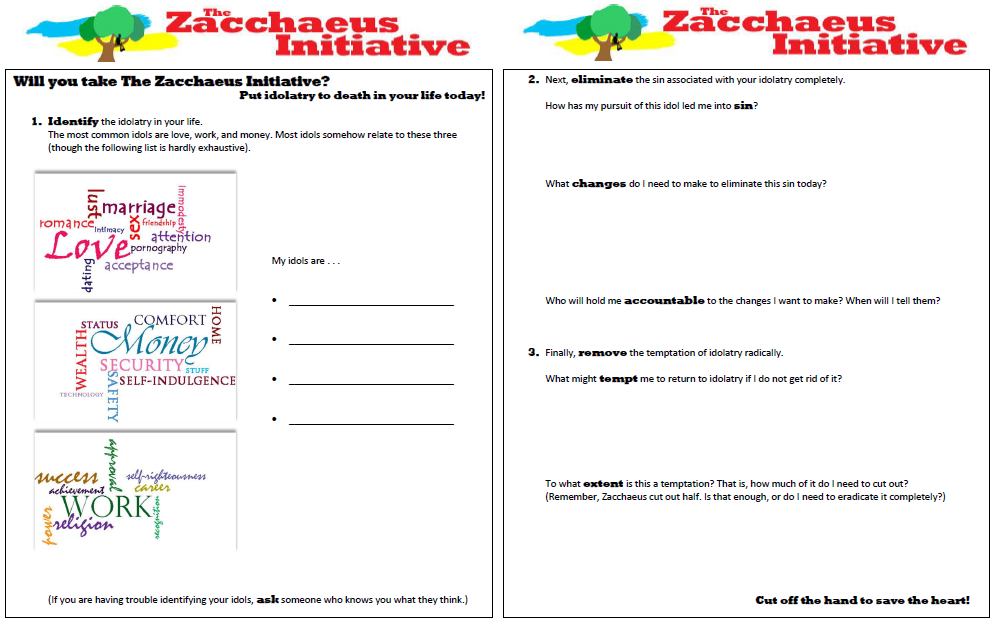 Have you taken The Zacchaeus Initiative?

Tell us how God has been working in your life!